The Challenges of Managing a Preschool

In this week’s episode we were joined by Bernice Attipe from Brec Childcare Early Years in London, Brenda Lattimore from Busy Bees in Dublin and Rowena Fisher from Phyllis’ Preschool in Cork.

To listen to this podcast on Spotify click the image below: 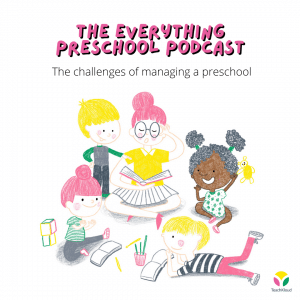 Beginning the show, Dr Wendy Oke begins by sharing her insights on what she believes are some of the key issues in early childcare:

Brenda notes that investment in staff and career progression needs to be addressed. Brenda’s preschool caters to 54 children, with 10 staff members and although it’s becoming very unsustainable to do that, she’s not prepared to decrease the amount of staff members as this would reduce the quality of care afforded to young children.

Paperwork and administration workload was also a major concern for the providers on the webinar. Although Brenda provides a four hour early childhood session another six hours can oftentimes be spent on paperwork. In an ideal world, Brenda would love to employ someone as a full-time administrator but unfortunately, doesn’t have the funds to do so. She didn’t start a preschool for admin, she started it to make a difference in children’s lives.

Bernice adds to this sentiment, explaining that a lack of motivation to work in early childhood care and education can result from the low pay attributed to the workforce. Although she agrees that there is far too much paperwork, Bernice did say that there has been a change recently in the UK where there is slightly less paperwork and more emphasis on you and how well you know the child and their needs etc.

Rowena has always worked in childcare, but about five years ago, opened up her own preschool. Her main issues would be funding, admin and inspections.

Increasing running costs are making it hard for providers to meet their obligation to the parents and the children. She mentioned an article from the Irish Examiner that had mentioned around 182 early years preschools closing over the last two years. She also mentioned that people tend to leave the sector and go into primary school teaching due to lack of pay but still wanting to work with children.

When asked what needs to be changed – all three panelists said that society needs to recognise and respect the amount of work that goes into early childcare. The bottom line? We need to appreciate and value our early childhood educators because they are a vital part of our society and we don’t want to risk any more preschools closing down!

In this week's episode of the Everything Preschool Webinar, we focused on Supporting Transitions: Settling in and ...

In this week's episode of the Everything Preschool Webinar, we focused on supporting children mental health through ...

Supporting Children With Anxiety: Practical Tips for Educators and Parents

In this week's episode of the Everything Preschool Webinar, we focused on supporting children with anxiety. Saskia Joss ...